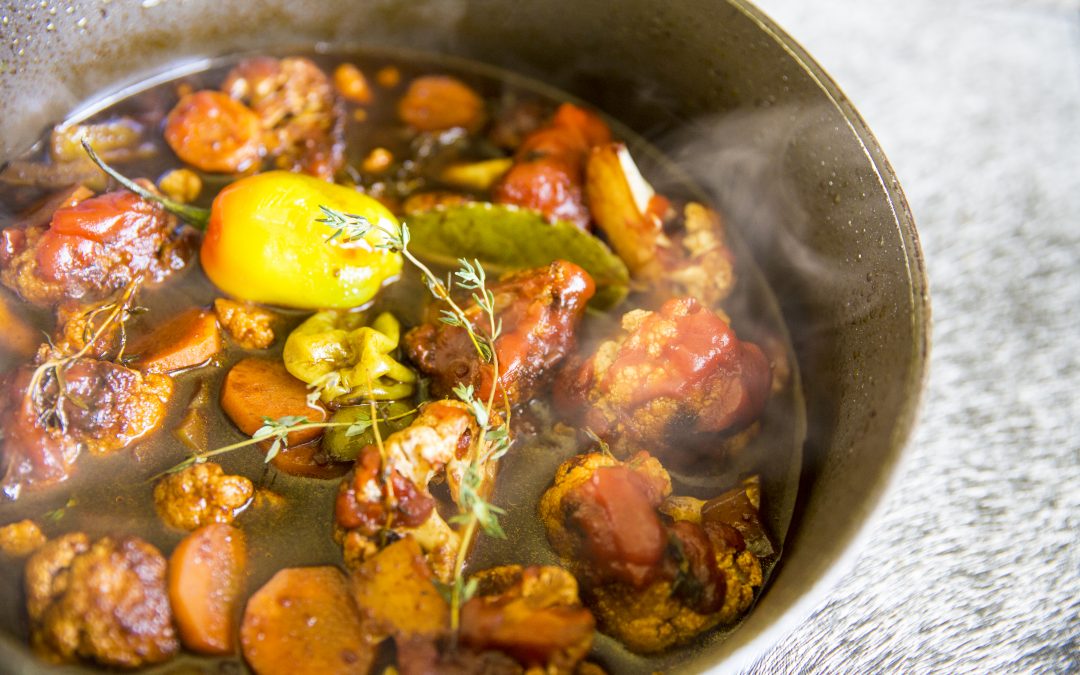 Seriously, who hasn’t heard of Jamaican Jerk Chicken? Jamaica is famous for its jerk cuisine. But, believe it or don’t, there is an even more prevalent way of preparing chicken in Jamaica. Sure, this way of preparation may not be as celebrated as jerk chicken, but on any given Sunday, you will find the overwhelming majority of Jamaican homes preparing Brown-Stew Chicken with Rice and Peas. The Rice and Peas, dahlings, we’ll have to talk about later because today we celebrate all things Brown-Stew. Well, not all things. One, very specific thing  – really. But I’ll get to that.

What exactly is Brown-Stewing? Why, I’m glad you asked. Brown-Stewing is a combination cooking method of dry and moist-heat cooking that results in a thick, rich pan sauce and tender protein or vegetable. The protein or vegetable is browned in little or no oil first  – the dry-heat cooking, then cooked in liquid, typically stock or water – moist-heat cooking –  to finish. The finished product has a deep, rich color and flavor from the caramelization from the browning. It also retains its shape well and is juicy and tender from being cooked in the liquid. This cooking method is commonly referred to as braising.

But what if you are avoiding meat? What about that significant portion of the Jamaican population who prefer to makeItal food? (For those of you not in the know, the concept of Ital food is expressed among the Rastafarians, as a manner of eating that enhances and promotes Livity – or long, healthy life. It is the belief that the food one consumes should nourish his body without causing harm. This means that chemically modified preservatives and artificial additives are avoided. It is through the practice of that belief that many Rastafarians, as a rule, shun meat and animal products on a whole, as the act of eating “dead flesh” is incongruous with Livity elevation.) Are you then bound to a life void of brown-stew? 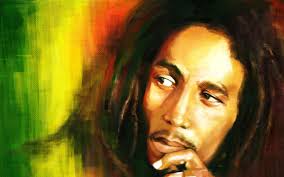 For shame! Such a life is scarcely worth living, I say. Enter the work-around. Well, it’s not so much a work-around as it is a thorough examination of brown-stew. What comes to mind when we talk of brown-stew? Is it the meat, i.e. the chicken, we think about?  Or do our minds conjur up spicy, earthy flavors; smooth, rich sauces; and vibrant colors? For me, the latter rings true. I believe there are specific spices and techniques – independent of what the protein may or may not be – that make Brown-Stew what it is.

When you think of Brown-Stew, immediately one thinks about the earthy, inimitable spiciness of crushed pimento berries/seeds. Berries from the pimento tree are commonly referred to as “allspice berries” as they are said to combine the taste and aroma of many other spices such as pepper, cloves, nutmeg, ginger, and cinnamon. You’d be happy to know that pimento seeds are the secret ingredient to jerk sauce/paste. I know, you’re welcome. They are tiny, deep brown-black balls that, when crushed, give up a pungent earthiness. With these bad boys, a little goes quite far. They can be crushed under the flat blade of a knife, but I usually pulverize them in my mortar and pestle. It is worth knowing that the aroma and flavor lingers for a very long time, so one should only use either the type of mortar and pestle that washes well (like ceramic) or one dedicated to spices only. 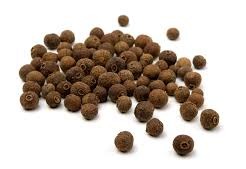 You also cannot escape the deep, rich, brown color of Brown-Stew. Certainly browning the meat prior to cooking goes a long way to deepen the color but any Jamaican worth his weight knows that the true secret to the dark mysteries of the brown-stew is Browning. No, not the fair-skinned empress around the corner. Seriously, if that came to your mind, I hereby rescind your cooking card. Tek a seat.

What I mean is that thick, dark stuff that slowly oozes from a bottle that almost magically darkens anything it touches with a single drop. Browning, with her mysteries stripped away, is simply burnt brown sugar and water. This rich caramel adds a depth of flavor to and certainly darkens food. Most Jamaicans and Jamericans (please don’t hate me, seriously it’s not a blasphemous term, I swear) will reach for a bottle of Browning. It’s readily accessible on the shelves in Jamaica and in places abroad where there is a good concentration of Jamaicans. Suffice to say, where I live is neither of these places. I would be hard-pressed to find a bottle of Browning at my local grocer’s. So, in turn, I’ve learned to make my own. It’s quite easy, really. If you can’t find Browning where you live, send me an email and I’ll tell you how. I can always be reached at askjenn@dajeneats.com. (If that’s what it takes to get emails from you, I’ll take it. I’m easy.) 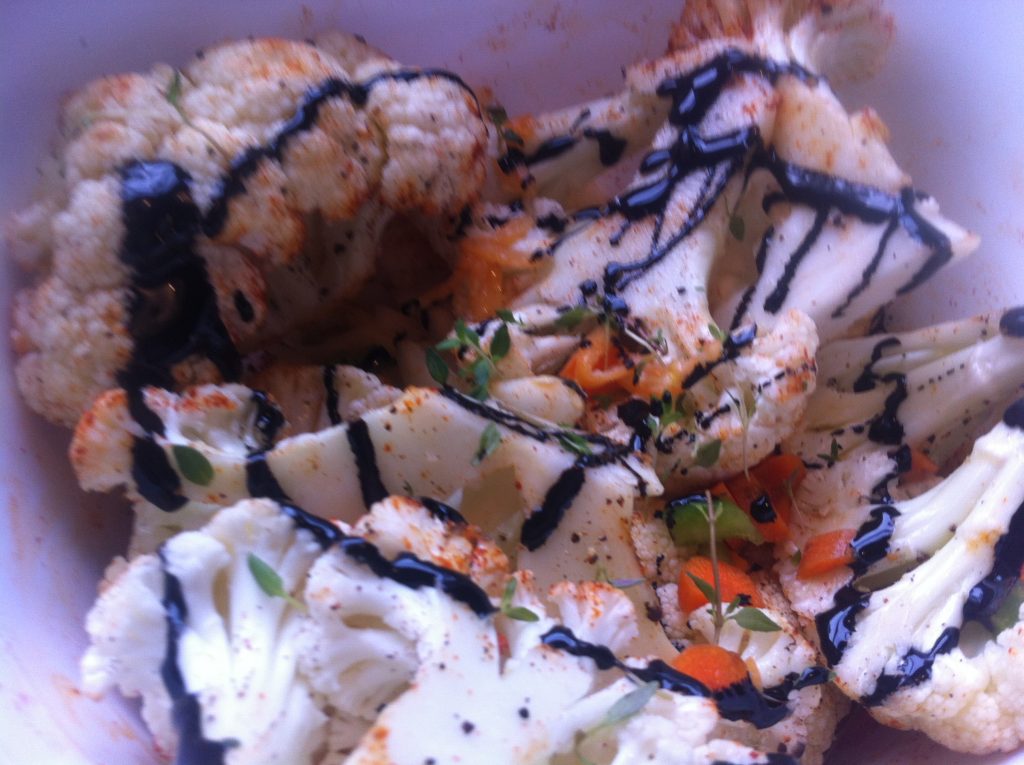 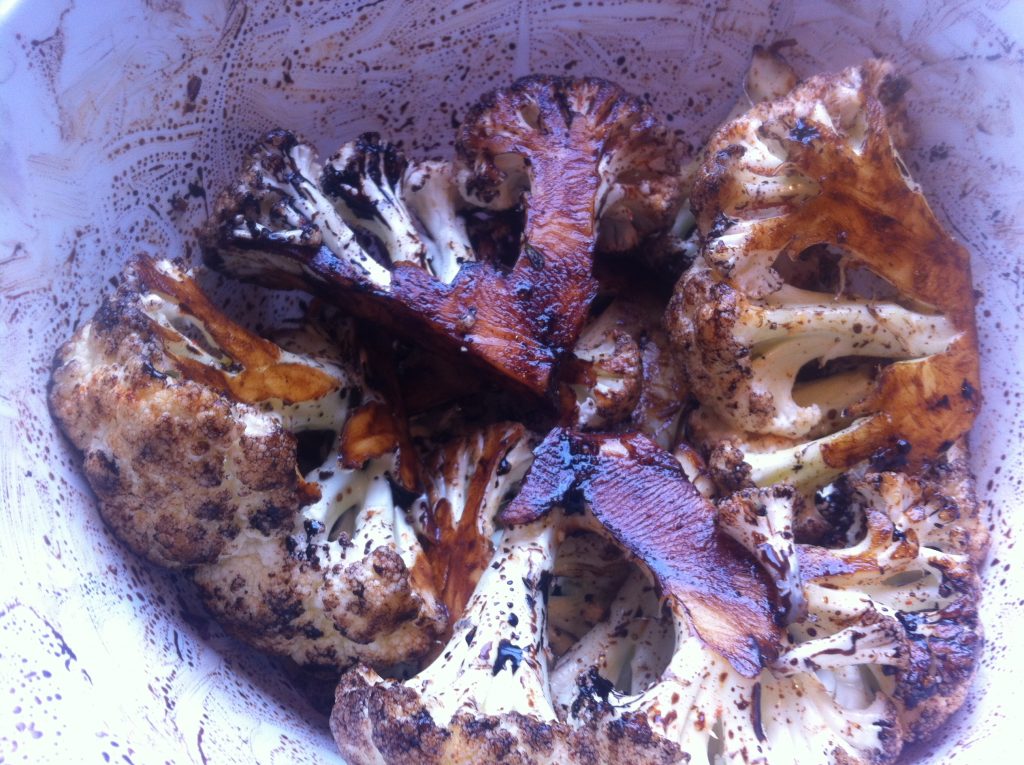 So, what if we were to combine true-to-flavor spices with tried-and-true techniques without meat? Would we be able to create a dish worthy of being called Jamaican Brown-Stew? Why, yes! Yes, we could. By “could” I mean “did”, and by “we” I mean “me”. Or “I”. Whatever.  Yes, I did.

I needed something to replace the chicken. Something that would absorb the flavors of the spices and seasonings well, that would also retain its shape. I found the ideal replacement in cauliflower. Its white color and relatively bland taste made it the perfect canvas. It would soak up the flavors and colors easily.

Let’s face it: the fat from the protein, when heated, adds an earthiness and umami to the dish that cauliflower just would not do. What’s a girl to do? Improvise! Necessity is the mother of invention, no? And what a mother she is. I’ve found that red wine and tomato paste will lend a dish the richness of the protein. Together, you can achieve the earthiness of the meat without actually using meat. I are genius! 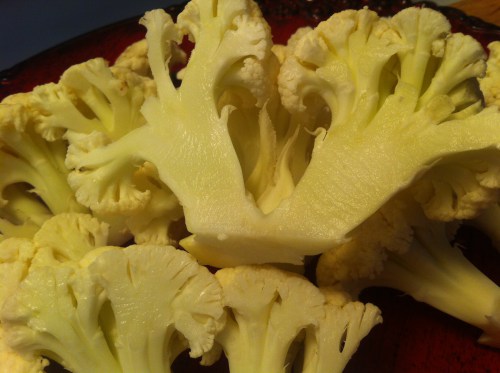 Be sure to cut your cauliflower florets flat to maximize cooking surface.

Now we have the proper seasonings to get the taste of Brown-Stew, the right ingredients to get the color and our secret additions to mimic the umami of protein. Finally, let’s get cooking. 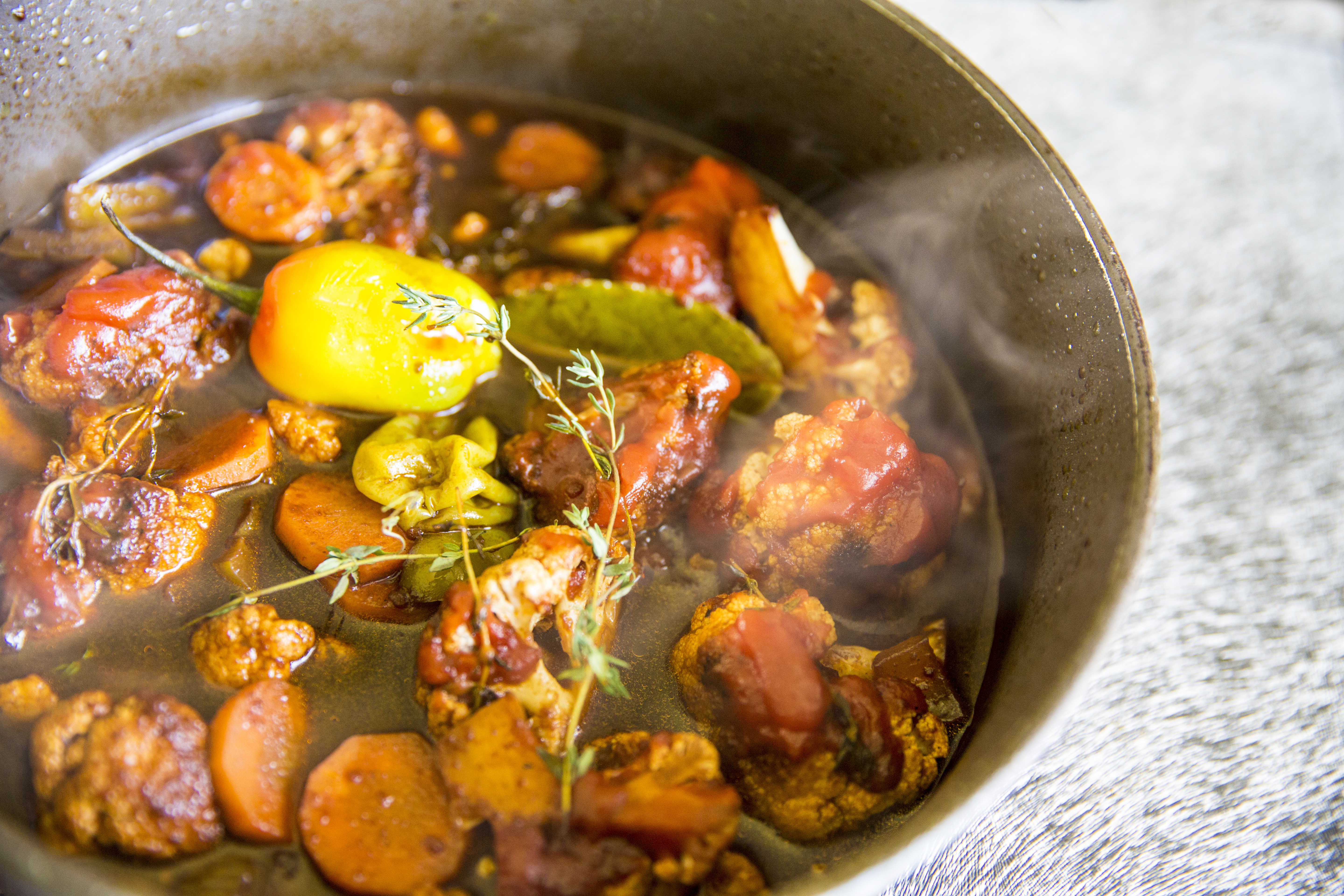