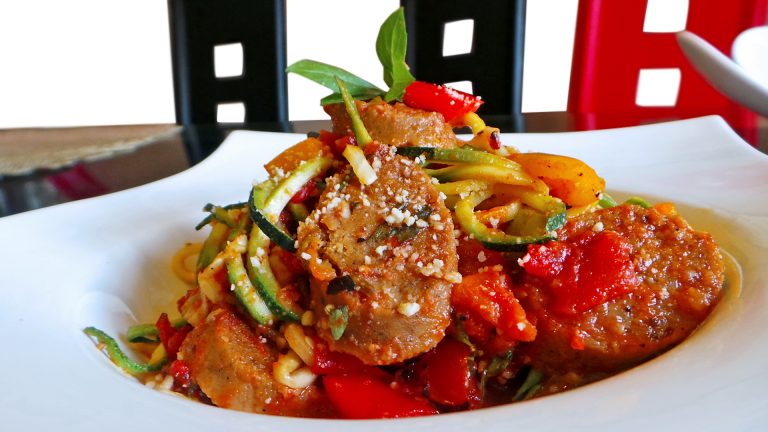 There are some foods, dahling, that simply don’t excite me. Whether it’s the taste or texture, some foods just kinda rub me the wrong way.

Now, don’t get all judgy when I tell you I have never been too excited about zucchini. I know, I know – it’s delicious. I can just hear you now. “But Jenn, Zuke? You don’t like Zuke? Zuke’s a really cool dude.” For me, Zuke has all the right flavors hidden in all the wrong feels.  The texture just doesn’t do it for me. I’m not a fan of the mushy middle, so I’ve tended to stay away from it.

However, dahling,  (I bet you thought I was going to say “but” right? I fancy myself a bit more eloquent – if not verbose. Ha!) I’ve been on a bit of a spiralizing kick and I’ve found that little gadget does wonders to the texture of many familiar foods. So, me thinks to myself, “Self, ought you not try the spiralizer with good ol’ Zuke?” Friend, I literally talk to myself, out loud, just like this – and in an odd British accent to boot.

And, what’s more, I answered. “Yes, self, you ought to give it a whirl.” Whirl…Self said whirl. I crack myself up.

Turns out the texture of zucchini is drastically improved when spiralized. I really like the dude. Gone is the mushy center and left are long strands of beautiful zucchini noodles, zoodles, that are crisp with a bit of a bite. I added them to sautéed Field Roast sausage and gently cooked them for a few minutes. Doing so released some of the juices creating a lovely sauce. The zoodles, however, were still crisp. Winning!

So, dahling, check out my video below. Don’t forget to subscribe to my YouTube channel. Leave me a comment letting me know what you think. What are some foods you just can’t get behind?